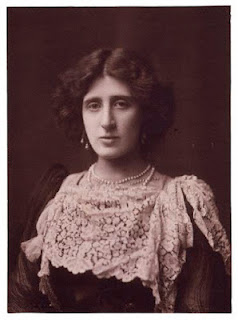 Bloomsbury in central London has always been associated with authors, writers and thinkers.
44, Bedford Square which today houses the Office of the Turkish Republic of North Cyprus, was once the beautiful home of Lady Ottoline Morrell and her husband Philip. It was the meeting place of the Bloomsbury group of English writers, philosophers and artists. Aldous Huxley, D.H. Lawrence, T.S. Eliot and many more, enjoyed her patronage and hospitality long before they rose to fame. She stimulated their creativity and even gave them financial help. In her coterie were painters like Augustus John the gypsy with a long mane and beard, and gold rings in his ears, as well as philosophers like Bertrand Russell who was thought to be her lover.

Ottoline was born in 1873, to General Arthur Cavendish-Bentinck and Lady Bolsover. She was the cousin of the Queen Mother, and acquired the title of ‘Lady’ because her half brother William succeeded to the Dukedom of Portland in 1879, and moved into the prestigious Welbeck Abbey in Nottinghamshire, where she grew up.

Ottoline was well educated, first at St. Andrews and then in Oxford. She loved Literature and Art, and was considered religious in spite of her unconventional life style. Not for her the galling restrictions of Victorian life. Her persona was a strange combination of aristocratic manners, deep religious faith, extreme shyness and eccentric sartorial preferences. She was a romantic at heart, and her first affair was with Axel Munthe, old enough to be her father. She turned down his proposal of marriage because he was an atheist.

Though she was a clever decorator and landscape designer, her pioneering work was never given the recognition it was due. Even the two volumes of memoirs which she wrote were published only after her death, and were watered down by fussy editing. Instead, she gained a questionable reputation through her proximity to the Bloomsbury group.

In 1906, her passion for Art and Liberal politics brought her in contact with the M.P. Philip Morrell, whom she married. Theirs was an ‘open marriage’ – a scandalous social aberration in the Victorian era. Each had their share of extramarital affairs. She was generous enough to support some of his illegitimate children. Ottoline bore Philip twins of which the boy died in infancy, but the girl Julia grew to adulthood.

The Bloomsbury group included several struggling intellectual eccentrics. Unlike the Victorian world with its strict social conduct, sexual restraints and low tolerance of crime, their attitudes to feminism, personal relationships, individual pleasure and liberal politics resembled the hedonism of the Hippies of later years. They threw convention to the winds and spurned what they called ‘bourgeois habits.’ G. E .Moore one of the writers said, “One’s prime objects in life are love, the creation and enjoyment of aesthetic experience and pursuit of knowledge.”

Ottoline though not of their inner circle, fell in with their views. She felt completely at home in their company, unfettered and free to indulge her sensual desires. Henry James said of her, “She is like a gorgeous heraldic creature – a Gryphon perhaps or a Dragon Volant.”
Among her list of lovers were Bertrand Russell, Augustus John, Henry Lamb, the Art historian Roger Fry and even a young mason who came to work on her Oxfordshire estate.

But the tragic part of her life was that most of these authors and poets took advantage of her friendship and generosity, and lampooned her in their novels. D.H. Lawrence based “Lady Chatterley’s Lover” on her, and Aldous Huxley portrayed her as a ridiculous character in his novel “Yellow Chrome.” She never forgave them for doing this.

Ottoline and her husband acquired a country house in Garsington near Oxford. The house was in total disrepair, but was renovated with a landscaped Italian-style garden and an ornamental swimming pool. During World War I it became a haven for pacifists and conscientious objectors like Duncan Grant and Lytton Strachey, who hid here to avoid prosecution. Siegfried Sassoon, who was recuperating from an injury, went AWL (Absence without leave) as a protest against the war.

Ottoline was wrongly accused as being a ‘lion huntress’ – a person who asked famous people to her house because they were well known. This was the unkindest cut of all, as many of her guests were unknown at that point of time, and most of them were impoverished. Those who scrounged on her generosity thought the Morrells were very wealthy. But in 1927, the Manor House had to be sold, and they moved into a modest cottage in Gower Street, London. In 1928, the poor lady was diagnosed with cancer, and her lower jaw and teeth had to be removed.

The Bloomsbury set which had regrouped after the war, continued to enjoy her hospitality. Her life and personality inspired many writers. She struts through the pages of Graham Greene’s novel “In a Battlefield,” as Lady Caroline Bury, or as Hermione Roddick in Lawrence’s “Woman in Love,” or as Mrs. Bidlake in Huxley’s “Point Counterpoint.”

Ottoline died in 1938. Henry Green the novelist eulogized her in a letter to her husband, recalling ‘her love for all things true and beautiful which she had more than anyone. No one can know the immeasurable good she did.’